Combining trumpet and piano at the highest level, this melodious duo delights listeners worldwide! As a 1986 ARD award winner and professor of trumpet at Hochschule für Musik Karlsruhe, Friedrich is one of the best-known trumpeters of this time. He is accompanied by his brilliant chamber music partner Eriko Takezawa. The duo excels with classics of their instrumentation, from sonatas by P. Hindemith, P.M. Davies and others to new commissions e.g. from Nina Senk or Franz Ferdinand August Rieks. 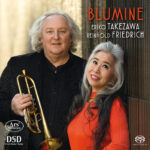 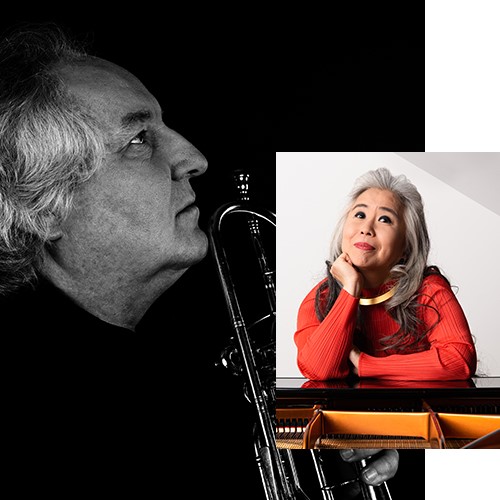 Since his success at the ARD Competition in 1986, Reinhold Friedrich has been playing on the world’s most famous stages – from the Vienna Musikverein and the Concertgebouw Amsterdam to the Berlin Philharmonie. He performs worldwide as a soloist on the modern and historical trumpet with numerous renowned orchestras such as the Bamberger and Wiener Symphoniker, the Orchestre Philharmonique de Radio France, the BBC Symphony Orchestra, the Berliner Barock Solisten and the Cappella Andrea Barca under the direction of conductors such as András Schiff, Heinrich Goebel, Sir Neville Marriner, Christopher Hogwood, Semyon Bychkov, Michael Gielen, Adam Fischer and Wladimir Fedossejev.

From 1983 to 1999 Reinhold Friedrich was principal trumpet of the Frankfurt Radio Symphony Orchestra. Since the foundation of the Lucerne Festival Orchestra in 2003, he has been permanent principal trumpet, first under Claudio Abbado, and now under Riccardo Chailly, as well as artistic director of the Lucerne Festival Orchestra Brass. Reinhold Friedrich is professor of trumpet at the Hochschule für Musik Karlsruhe, honorary professor at the Escuela Superior de Musica REINA SOFIA in Madrid and a sought-after lecturer for master classes worldwide.

As part of his involvement in contemporary compositions, he has premiered a large number of works by Wolfgang Rihm, Hans Werner Henze, Luciano Berio, Sir Peter Maxwell Davies, Matthias Pintscher, Eino Tamberg, Benjamin Yusopov and Peter Eötvös, among others. Numerous recordings for labels such as ARS, DG, Capriccio, MDG, and Sony document his work and were awarded prestigious prizes such as Echo Klassik and Deutscher Schallplattenpreis.

Eriko Takezawa was born in Hiroshima (Japan) and studied in Germany with Naoyuki Taneda and Wolfgang Manz. She passed her concert exam with distinction in 1995, and later, completed her education with masterclasses taught by J. Uhde, E. Picht-Axenfeld, D. Kraus, and S. Dorenski.

Prizes at international competitions around the globe followed, including the first prize at the international piano competition in Ostuni (Italy) in 1994. This success led to a busy concert schedule, playing at music festivals and concert stages in Europe and Asia, such as the Schwetzingen Festival, the Schleswig-Holstein Musik Festival and the Lucerne Festival.

Eriko Takezawa is a popular chamber music partner of renowned wind soloists such as Reinhold Friedrich, Sergio Azzolini, Ingo Goritzki, Renate Greiss-Armin, and Thomas Indermühle, as well as a permanent fixture in the Mahler Chamber Orchestra. For many years, she has also been one of the most sought-after accompanists for international competitions and concert projects. She has been extraordinarily successful as a soloist around the globe with Shostakovich’s Piano Concerto No. 1. She was equally successful in 2014 with Gershwin’s “Rhapsody in Blue” and with Benjamin Yusupov’s “Listen to our Cry” at its premieres in Israel and Germany.

The media praise her lightness, technical brilliance, and captivating musicality which enchant her audiences time and again.  Her numerous award-winning recordings, such as her CD “Mysteries”, in collaboration with Simon Höfele (Deutscher Schallplattenkritikpreis 2018), also bear witness to her outstanding musical career.

Reinhold Friedrich’s Duo Friedrich & Takezawa inspires with new, innovative programs as masterpieces for trumpet and piano of all epochs are formed into colourful bouquets. New music by contemporary avant-garde composers appears next to the classics of the repertoire. Alongside compositions by György Ligeti and Toshio Hosokawa, works by Georg Philipp Telemann, Johann Sebastian Bach and Girolamo Fantini make an appearance in their Baroque splendor.

They also present intelligent arrangements, such as the newly composed sonata after Richard Strauss or the “Blumine” by Gustav Mahler for trumpet & piano, “Rhapsody in Blue” by George Gershwin or “In the Style of Albeniz” by Rodion Schedrin.

But we also hear new pieces written specifically for this melodious combination of instruments! With classics such as the sonatas of Paul Hindemith, Sir Peter Maxwell Davies and George Antheil, the duo’s focus lies on the current repertoire. They also frequently commission young composers such as Nina Senk (1982), Katrin A. Denner (1986) and Franz Ferdinand August Rieks (1998) to write new pieces.

Solo contributions by the two musicians also add to the program: from J.S. Bach to C. Debussy to Toru Takemitsu and Wolfgang Rihm on the piano, and Luciano Berio’s Sequenze or the Sonatine by H.W. Henze on the trumpet.